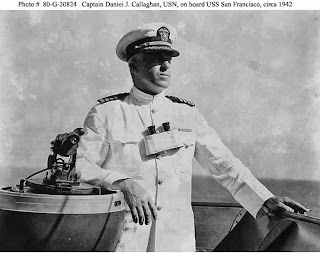 Of the five American admirals lost during World War II – the only war in which we lost any – two were killed in action in the same desperate surface engagement. It was also the only time in our history that two flag officers – each posthumously awarded the Medal of Honor – fell on the same day, in the same battle. Part of the costly 6-month struggle for , the furious and seemingly hopeless night battle of Friday, November 12-13, 1942 and the 48 hours of combat to follow – the Naval Battle of Guadalcanal - marked a turning point in the campaign. Defeat was no longer a real possibility. Few now recall how desperate those days were. The opening phase of that terrible night battle witnessed both heroism and mistakes of deployment and maneuver were made on both sides, but no one deserves more credit for the ultimate outcome - strategic victory - than does Daniel Judson Callaghan. 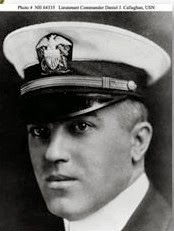 Born in on July 26, 1890, Dan Callaghan came from a religious Catholic family that had immigrated to the  fifty years earlier from . Educated in parochial schools in the Bay Area, and inspired by Admiral James Raby, an uncle who had attended , Dan won a senatorial appointment as first alternate to the , where he quickly earned a reputation for his steady and serious demeanor. He graduated #38 (of 193) in the Class of 1911, which also included his friend, Norman “Scotty” Scott of Indiana who ranked near the bottom of their class. 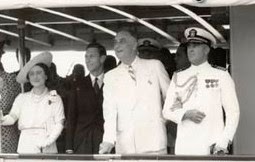 Transferred to the cruiser as executive officer in 1916, he spent World War I on convoy escort duty and was promoted to Lieutenant in March 1918, followed by promotion to Lt. Commander in 1921. By1938, he was serving as Naval Aide to President Roosevelt (above photo with the King and Queen of Great Britain). Realizing that war was inevitable, however, he pushed hard for a transfer and in May of 1941, was named skipper of the 10,000-ton heavy cruiser USS San Francisco (CA-38). Known in the Navy as “Uncle Dan”, he was in for an overhaul on December 7, 1941 and was untouched. 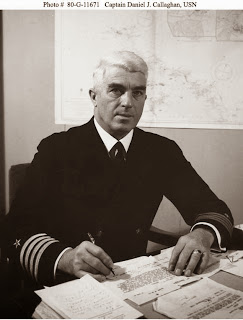 Promoted to Rear Admiral, Dan Callaghan was next appointed Chief of Staff to Vice Admiral Robert L. Ghormley, newly named Commander, South Pacific Area. When Ghormley was relieved, Admiral William “Bull” Halsey took over and Callaghan took command of a cruiser Task Force with his flag on the San Francisco. On the night of November 12-13, 1942, a powerful Japanese force of battleships, cruisers and destroyers came down the 'slot' to pound Henderson Field and knock it out once and for all. 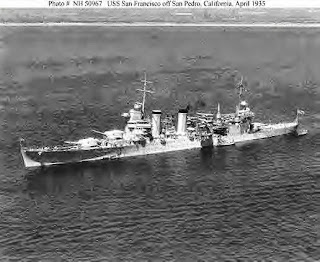 Callaghan deployed his ships according to Battle Disposition “Baker One”, a single column of three groups - four destroyers in the Van Unit, followed by the five cruisers in the Base Unit, with four destroyers in the Rear Unit. This arrangement facilitated ease of navigation and maneuver in the narrow channels near . The light cruiser USS Helena spotted the enemy early in the battle, but with the chance for surprise lost, the battle quickly became what one sailor described as, “a barroom brawl after the lights have been shot out.” 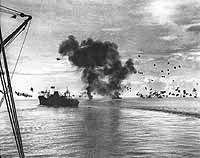 Callaghan realized that survival depended on maintaining the fire of his largest ships even at the risk of friendly fire. He issued his final command to the gunnery officer, “We Want the Big Ones; Get the Big Ones First!”  It was both an order and a prayer. The Japanese battleships continued to pound San, which suffered 45 large caliber and countless smaller hits during the battle. There was undoubtedly friendly fire in the night action. Two minutes later, Callaghan was dead along with  Medal of Honor hero Captain Cassin Young. The badly damaged USS San Francisco fought the enemy to a standstill, helped cripple the Japanese Battleship Hiei sank a destroyer and was still on station when the enemy withdrew. Many crewmen were decorated. 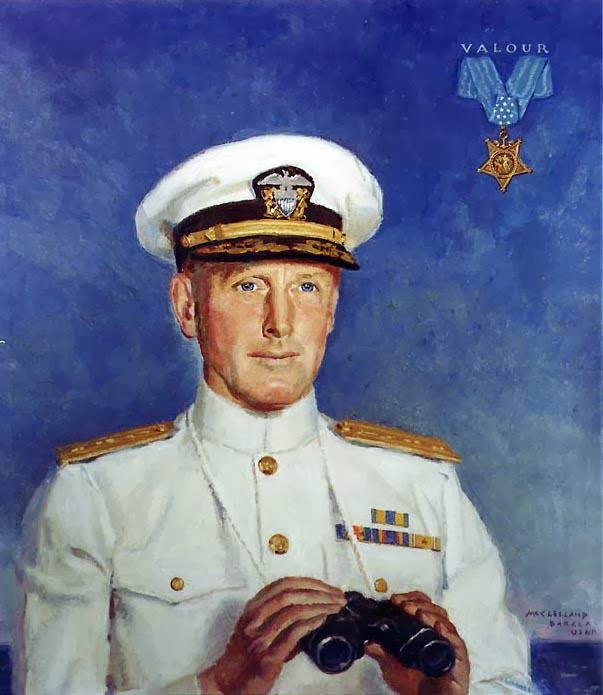 Adm. Norman Scott
It was one of the most sunning reversals in naval history, evocative of the Battle of Samar 25 October 1944, also characterized by a great disparity in forces. But the cost of stopping the enemy was very heavy. In addition to the loss of several destroyers – along with their captains - the USS was lost along with Dan's classmate and friend Admiral Norman "Scotty" Scott, commanding the other surface cruiser Task Force. During the battle the cruisers USS Portland and Juneau were badly damaged, and the latter was sunk the next day by enemy submarine I-26 along with Captain Lyman K. Swensen and nearly all hands, including all five Sullivan brothers. 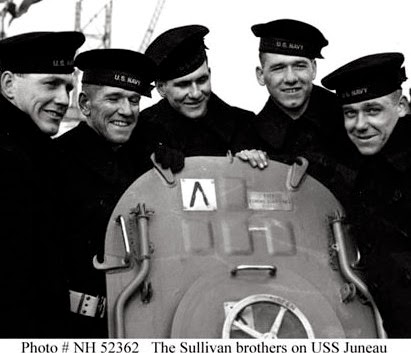