“In no engagement of its entire history has the Navy shown more gallantry, guts and gumption than in those two morning hours between 0730 and 0930 off .” Samuel Eliot Morison, Official Naval Historian 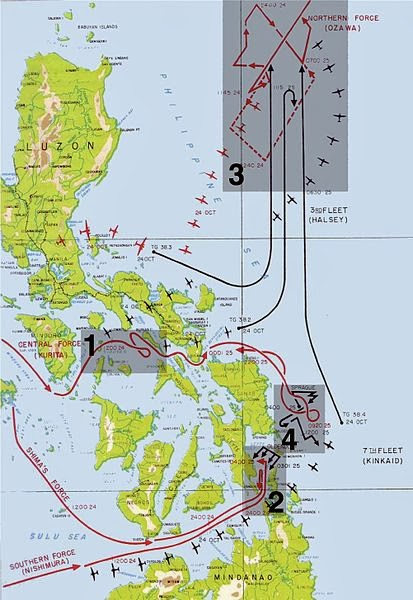 By the dawn of 25 October 1944 it looked like the battle – the biggest and most complex in naval history – would end in a tremendous American victory. Submarines, surface forces and naval aircraft each in turn pummeled the Japanese fleet and caused great damage. Three enemy battleships, two cruisers, and two destroyers had been sunk and the same number of ships had been badly damaged. Thousands of Japanese sailors had lost their lives. Our own losses – one light carrier sunk, a cruiser damaged, and a few dozen aircraft lost, as well as nearly a thousand men killed, wounded, or missing - had been relatively light compared to the damage inflicted. Admiral William “Bull” Halsey’s Task Force 38 was at that moment hunting down the last of Admiral Ozawa’s carriers. With the Japanese fleet now retiring in every direction, the 175,000 soldiers of the US Sixth Army in the beachhead and the fleet of transports lying unprotected off shore were safe. The Liberation of the – the realization of MacArthur’s promise to return and redeem the sacrifice of the men of Bataan and – would proceed to its inevitable victorious conclusion. The elaborate Japanese SHO-1 plan had ended in total failure. 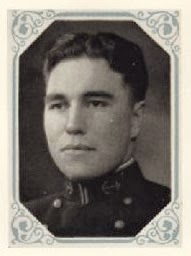 At daybreak of October 25, the , a Fletcher-class destroyer, was protecting a Task Force of six small “jeep” escort carriers (radio call sign “Taffy Three”). Her captain, Lt. Comdr. Ernest E. Evans, an Oklahoma-born, barrel-chested Cherokee Indian, and graduate of the Naval Academy Class of ’31, was an experienced surface officer who had commanded the for one year. 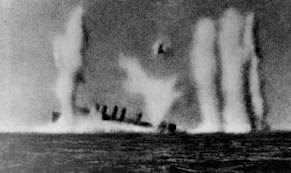 Before that, Evans had served as Executive Officer of the ALDEN, a “four piper” WWI-era destroyer that had survived the terrible early WWII battles which annihilated Admiral Thomas Hart’s U.S. Asiatic Fleet. After the final Allied defeat at the of the in late February 1942, the ALDEN had escaped to turning her tail to the enemy and slinking off in the night. The experience seared Evan’s soul. In an unbelievable stroke of foreshadowing and echoing the famous words of John Paul Jones, Evans told his men on JOHNSTON's commissioning, “This is going to be a fighting ship. I intend to go in harms’ way and I will never again retreat in face of the enemy. Anyone who doesn’t want to go along had better get off right now.” 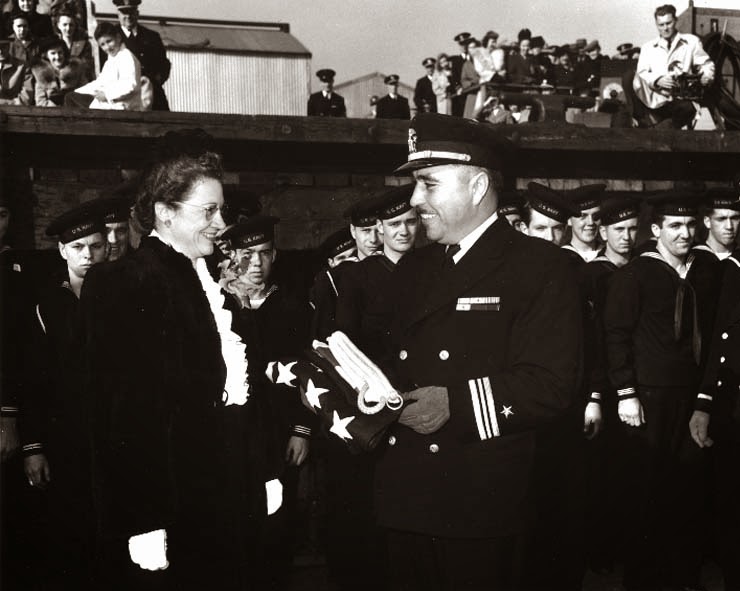 Just 20 minutes after sunrise, a patrol pilot over “Taffy Three” radioed a stunning message, his excited voice crackling over the ships’ radios. “Enemy surface force of 4 battleships, 7 cruisers, and 11 destroyers at 20 miles north your task group and closing 27 knots.”  Vice Admiral Takeo Kurita’s First Striking Force – the most powerful enemy surface fleet ever sortied - had suddenly appeared undetected and was bearing down on the helpless beachhead. Nothing stood between the enemy and the complete annihilation of the invasion forces except the tiny escort carriers of “Taffy Three”, their few outdated Wildcats and bombers, and their outgunned destroyers. Large caliber shells where already striking the vulnerable carriers, esp. GAMBIER BAY. 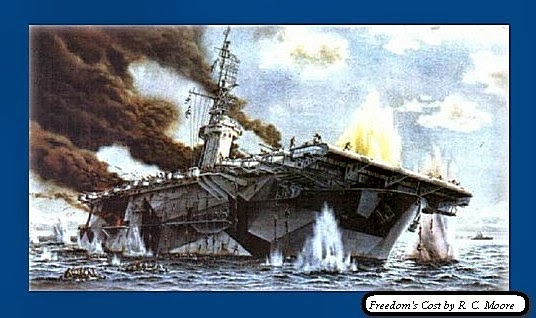 The was closest to the enemy and without waiting for orders, Evans turned his ship directly into their path charging full steam ahead, guns blazing, torpedoes loosed. What followed brought Evans and his ship full circle from the retreat of the ALDEN. When it was over, Ernest Evans, JOHNSTON, GAMBIER BAY, and the tin cans HOEL and SAMUEL B. ROBERTS - as well as many hundreds of their men – would be at the bottom of the sea. But the beachhead and the Americans fighting there would be safe and victorious. 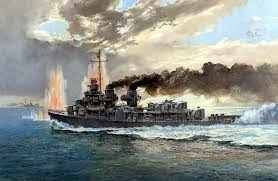 In describing the suicidal charge of the destroyers, Fleet Admiral Chester Nimitz said “The history of the United States Navy records no more glorious two hours of resolution, sacrifice, and success.” The ’s senior surviving officer had a more personal observation, “The skipper was a fighting man from the soles of his broad feet to the ends of his straight black hair. He was an Oklahoman and proud of the Indian blood he had in him. We called him – though not to his face – the Chief. The was a fighting ship but he was the heart and soul of her” and communications officer Lt. Ed Digardi said, “He was the best Captain you could possibly have; the kind of man you would follow into hell … and we did.” The posthumous Medal of Honor awarded to Ernest Evans that day was as much to honor the men of Taffy Three as to single out the Cherokee warrior who gave his life leading the counterattack that turned back the enemy.
Posted by Unknown at 2:49 PM