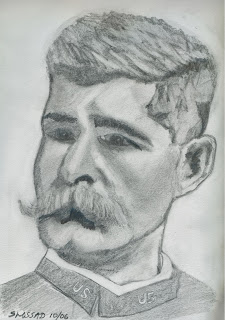 A century ago, Henry Ware Lawton was one of the most famous and celebrated heroes in ’s military history. His exploits in four conflicts – the Civil War, Indian Wars, Spanish-American War, and the Philippine American War – and spanning almost four decades, read like the most fantastic and exciting fictional adventure stories. 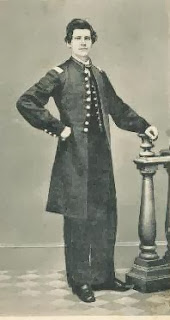 was born on March 17, 1843 near , and raised in by relatives. His life was hard but a benefactor made possible opportunities unusual for his time and circumstances. Just four days after the attack on , he left college and signed up as a 1st lieutenant in the 30th Indiana Volunteers. The strapping, 6’3” teenager turned out to be a born leader. 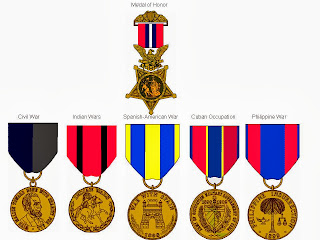 In nearly four years of service, he fought in more than twenty Western Theater battles, including such major blood-lettings as Shiloh, , , and . For his heroism in the fighting outside , he was awarded the Medal of Honor. By the end of the war the 22-year old was a brevet colonel commanding his regiment. He had not suffered so much as a scratch.

For the next twenty years, served on the western frontier fighting against the tribes of the southwest. Serving in the 4th Cavalry, was the right hand man and resourceful quartermaster under the legendary and eventually mad Colonel Ranald Slidell Mackenzie. The two piled up victories in a ruthless campaign against the great tribes of the plains – including one bloodless masterpiece of tactical art against several tribes near in 1874. 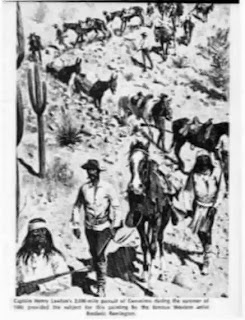 A decade later in 1886, when Army commander Phil Sheridan ordered the capture of the Apache medicine man Geronimo, Lawton led the main effort across the southwest. Accompanied by newly minted, Harvard trained surgeon Lt. Leonard Wood, the grueling 3,000-mile march through desert and mountains was both odyssey and nightmare. The men were tormented by hunger, disease, and exhaustion. At one point, Wood was bitten by a tarantula and came close to death. Finally, in early September 1886, the exhausted Geronimo surrendered. He was never captured. 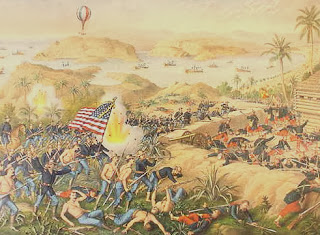 L’s career took off and at the outbreak of the Spanish-American War he commanded a division assigned to the Cuban Campaign. His main mission was to support the attack on by taking El Caney. It took longer and cost more than expected, but late on July 1, 1898 ’s men took the town. It was the largest land battle American fought since the Civil War and overlooked because of ’s great – and visible – victory. 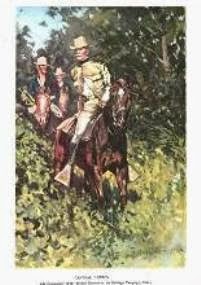 After duty as a military governor in , sailed for the in early 1899 where he took command of a division actively engaged in the Philippine American War (1899-1902). Over the next 8 months, he led his division on numerous campaigns, using new tactics like forced marches in the darkness. After a victory at , at the southern tip of peninsula, he organized a municipal government to consolidate local rule. 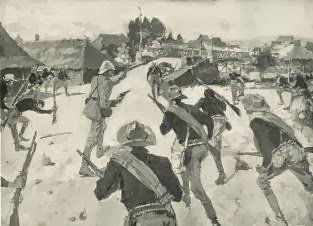 On December 16, 1899 returned to to visit with his family before undertaking a new offensive aimed at the town of in the . He kissed his wife and children goodbye and after an all night ride arrived on the outskirts of very early on December 19, 1899. Three hours later, he was dead, killed by a single rifle shot as he was walking at the front in full view of the enemy. 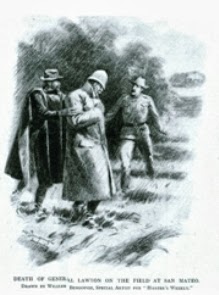 was eulogized as a great soldier, but also an enlightened proponent of colonial administration. He thought seriously about civil affairs and military government in occupied territory and heartily advocated displacement of the latter by the former as soon as practical, where the natives manage all but security affairs throughout all the regions in which Spanish sovereignty had been displaced. At the beginning of ’s colonial experiments, was a Proconsul who, while successful in war, tried to build the peace with some degree of goodwill and moderation.

Henry Ware Lawton was the only general awarded the Medal of Honor during the Civil War to be killed in action, the first serving general to be killed outside of , and the only serving general lost in the Philippine War. In a stroke of almost unbelievable irony, the forces he faced at San Mateo - and the man who brought the giant down – were commanded by a general whose name was Geronimo.